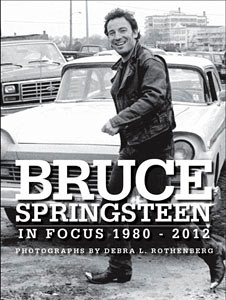 Debra L. Rothenberg's first book, BRUCE SPRINGSTEEN IN FOCUS, PHOTOGRAPHS 1980-2012 hit book stores in October 2013. The Wall Street Journal said it was one of "the best photo books for fall" and The NY Daily News called it "amazing" and it was #2 on the Amazon best sellers list for several months. It won a first place IPPY Award at the Independent Publishers Book Awards Gala in late 2013. Her second book, "You Don't Have to Be Purrrrfect," is a humorous photographic book, featuring her two cats and will teach people that daydreaming is fun, friendship is important, and that it's ok to be different.

She has recently gone on assignment to Haiti and Peru for cmmb.org, an NGO the educates women and children on healthcare, education and bettering the lives of themselves and their children.

Debra has lectured about her career across the United States at the Apple Store, colleges, major camera stores (Adorama, Unique Photo, Bergen Camera among others), Libraries, Mohegan Sun, Lincoln Center, and for Women's and photography groups and is available to speak for any event related to photography, celebrity and concert photography, or focusing on following your dream to attain your goals. Debra provides an entertaining slide show, shares interesting stories on how to develop a shot, and she provides encouraging remarks for budding photographers or anyone beginning a creative endeavor. Debra is best known for her presentation on her journey photographing Bruce Springsteen for over three decades, how her career developed, and how photography has changed and evolved through the years, and the story behind the photos of an American icon.

She is an award winning photographer residing in New York City and earned a Bachelor of Fine Arts degree in Photographic Illustration/Photojournalism from Rochester Institute of Technology. She is an accomplished professional whose photographic range consists of music/concerts, celebrities, news, sports, CD and book covers, newspapers and magazines, portraiture, children, events, and public relations. Among her many accomplishments is a National First Place award in the sports category from the National Press Photographers Association.

Her photography has been distributed and exhibited worldwide in galleries, newspapers, magazines, books, CD covers, and many web sites.

For assignments, availability, and a list of the musicians/entertainers and stock photography on file, please contact her at
(917) 301-6097
or
[email protected]

INTELLECTUAL PROPERTY / COPYRIGHT All images, text, graphics and html coading appearing on the DebraRothenberg.com website are the exclusive intellectual property of Debra L. Rothenberg and are protected by United States and international copyright laws. DebraRothenberg.com may not be used, copied, downloaded, reproduced, manipulated, or transmitted by use of computer or other electronic means or any other method or means now or hereafter known, without the written permission of Debra L. Rothenberg.